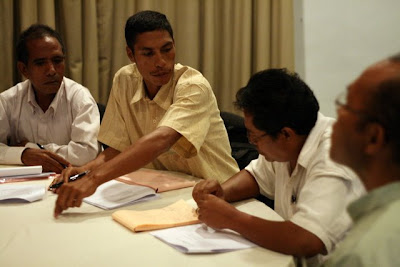 In the last month, Global Integrity’s Nathaniel Heller and I have been traveling in the South Pacific, talking with local experts about the results of the Global Integrity Report: 2007. In Timor-Leste and Vanuatu, we convened government officials, civil society activists, foreign donors and journalists to talk about corruption and governance. This is what we learned.

Our first stop was Timor-Leste, a country that is very nearly starting from zero in its efforts to create the institutions necessary for democracy. Despite this, and despite the many tragedies of its history, both recent and past, I was left with a sense of cautious optimism for the future of the new nation. I spoke to so many people in Timor-Leste who had a sense of purpose and determination about the work they were doing.

Still, there is so much work to be done. Infrastructure is poor; we planned our workshop by candlelight after the power cut out during a heavy rain. Internally displaced persons (IDP) camps are an inescapable feature of the capital — muddy, crowded lots of big tents with aid agency logos on them. In a very real way, Timor-Leste is starting over.

To give some context, consider this vignette: the justice system has recently been converted from speaking Tetum (a local language) to Portuguese (the language favored by the resistance movement). However, only some 5 percent of the population speaks Portuguese, causing a shortage of qualified lawyers and judges. An informal tally lists the total number of judges, prosecutors and defense attorneys working in the country at under 30 people. There is only one functioning court house outside of the capital of Dili. And of the eight or so prosecutors available to try cases in Timor-Leste, three of them were still living in IDP camps. Not exactly an ideal working environment.

But work goes on. Earlier this month, Global Integrity and AusAID convened a workshop of government officials, advocates, donors and journalists to discuss corruption and governance in Timor-Leste and to plot a course for the future of anti-corruption policy. Global Integrity’s role in this discussion is not to provide answers or recommendations. Instead, we bring a process of structured reflection and an evidence-based dialogue that enables local stakeholders to identify areas for improvement and establish their own priorities for reform.

The results of this process are published here:
Timor Leste Workshop conclusions

Pictures from our trip are here.