Georgia’s Lessons for the Next U.S. President 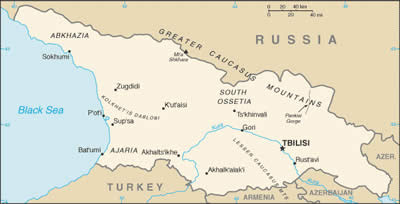 With a neo-Cold War standoff brewing, it’s a shame the caricatures of Georgia’s government have little to do with the facts. In truth, Georgia’s young democracy is more flawed than its boosters would have you believe.

Georgia’s Lessons for the Next U.S. President
Op-Ed by Nathaniel Heller & Global Integrity

While plenty of justified handwringing is taking place over just how the U.S. should respond to Russian provocations in Georgia, some of the root causes of the recent crises have been overlooked in the rush to brand Moscow an aggressive belligerent, Tbilisi an irresponsible provocateur, and Washington a hamstrung bystander. While the storyline to date is accurate enough, it ignores some of the institutional drivers of the crisis and the failures of U.S. democratic reform efforts in much of the post-Soviet world, not just Georgia. The next U.S. president will be faced with a pro-democracy agenda that may have reached its limits.

Yes, Georgia picked this particular fight that Russia was certainly spoiling for. But what is interesting to note is that it was no act of the Georgian Parliament that launched the Georgian offensive – instead, it was a sudden announcement by the Georgian Ministry of Defense, an arm of the Georgian executive, indicating that it had sent troops into South Ossestia, “to restore constitutional order in the entire region.”

Why does this matter? Georgia has been held up as a shining example of democracy and rule of law in an otherwise lawless, authoritarian neighborhood, and President Bush’s personal support for the Saakashvili government (as well as endorsements from prominent Democrats, including both Barak Obama and Joe Biden) has only reinforced the notion. But the reality of democracy in Georgia is far more complex, with many observers having noticed a worrisome trend towards a consolidation of power in the Georgian presidency, the kind of unchecked authority that can quickly get a country into war.

Back in 2006, Global Integrity, an international organization that tracks governance and corruption trends, reported that, “…the elite, well-educated ‘NGO class’—the intellectual core of Shevardnadze-era Georgia that worked closely with Saakashvili during the revolution—worry that the government is reforming haphazardly without developing institutions that will last beyond Saakashvili’s tenure. They also fear that the additional powers granted the executive branch by the legislature have eroded the political system’s checks and balances.”

One year later, Global Integrity’s 2007 data assessing the accountability of Georgia’s executive branch had dipped further, noting how, “Governing by decree is done almost all the time in Georgia,” and that the distinction between the ruling party and the state had become extremely blurred, with political projects such as “eating halls for the poor” and a Presidential Football Cup being paid for out of municipal and government coffers. 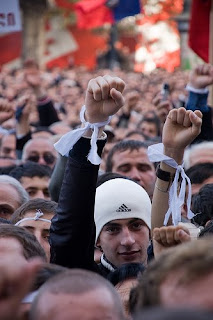 Meanwhile, as Georgia slid backwards towards an African “big man” style of governance, the U.S. government was racing forward with new aid and assistance as a reward for the country’s ostensible democratic gains. In addition to significant military training and assistance, Georgia was one of the first countries to qualify for a $295 million agreement with the U.S. Millennium Challenge Corporation, which rewards reforming developing countries with large aid packages. The indicators that MCC uses to award its grants rated Georgia’s 2008 performance on issues like “government effectiveness” and “control of corruption” near the very top of the list for countries with similar income levels. While there are certainly plenty of poor countries with poorer governance, the notion that Georgia is the best in its class comes off as goofy. The MCC process is a good one, but its continued reliance on suspect data as the basis for its grant-making only undermines its credibility.

The counter-intuitive MCC results speak to larger flaws in U.S. democratic assistance abroad – the tendency to mistake revolution with real institutional reform; equating elections with true democratic consolidation; and an overreliance on the executive branch at the expense of legislatures and the courts. A tour de horizon of Georgia’s neighbors in the Caucasus and Central Asia only reinforces the severity of the challenge – it is a neighborhood run by overly-powerful presidents and prime ministers, weak or subservient legislatures, and civil societies and media under pressure. This reality will present real and growing challenges for the next U.S. president regardless of the outcome in November.

If American interests in the region are to be served, then the new U.S. administration will have to take a hard look at how it pushes forward the democracy agenda in an increasingly volatile corner of the world, now with a reinvigorated Russia breathing down its neighbors’ necks. The Georgian case – whose tragedy we can see reflected in the stalled reforms in Ukraine, Moldova, and Central Asia – can provide the new American president with at least one valuable lesson: relying on personalities rather than institutions is unlikely to yield long-term democratic gains. While leadership matters greatly, today’s crisis in the Caucasus reminds us of the dangers of placing too much authority in the hands of a single leader, even if he is one of the “good guys.”

— Nathaniel Heller is Managing Director of Global Integrity, an international non-profit organization that works with local journalists and researchers to track governance and corruption trends.