Notes from Paris: Every Human Has Rights Gala 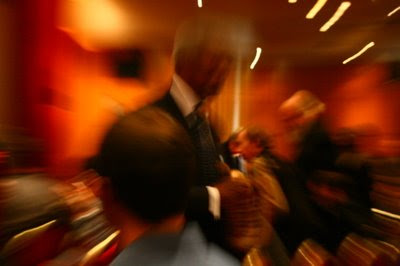 The photo above is as close as I got to the former UN Secretary General — it’s photographically flawed, but the overall impression is right on.

The event in Paris served to acknowledge the media award winners and worked as a pep rally for the larger Every Human Has Rights (EHHR) campaign, an international advocacy effort to focus attention on human rights worldwide. The video below tells their story:

Global Integrity won the EHHR Media Award for a report on internet censorship which drew content from the vast information published annually in the Global Integrity Report. While I wrote the winning entry, I can’t take credit for the content — it was entirely dependent on reporting from the 275+ local researchers and journalists working with Global Integrity in late 2007. This is their award, and I am grateful for their ongoing efforts.

While in Paris, I’ve been privileged to spend time working and living with the other award winners. They are a diverse, rowdy group that has a habit of spilling beyond our container: when we were herded onstage for a photo op with former Presidents Jimmy Carter (US) and Mary Robinson (Ireland), the event devolves into a scrumlike press gaggle, led by African journalists wanting to know how President Carter would be engaging Robert Mugabe regarding the cholera outbreak in Zimbabwe. The news never stops. President Robinson addressed the institutional underpinnings of human rights, which made me happy because Global Integrity is built on the idea that institutions matter.

There’s one other observation that has stuck with me this week. There were more than 500 entries to this award. Of the 30 projects that won, local reporters from the Global Integrity field staff had worked on three of them (US, Malawi, Ghana). The Ghana report was winner of special prizes for Most Courageous Reporting and Best Investigation. A fourth winning story was written by a journalist who has worked closely with Andreas Harsono, Global Integrity’s lead Indonesian reporter for many years. We have said many times that our network of local talent is really, really good. But this feels like proof to me.

PARIS, Dec 08, 2008 /PRNewswire via COMTEX/ — PARIS, Dec. 8 /PRNewswire/ — Former US President Jimmy Carter, former Irish President Mary Robinson, former UN Secretary-General Kofi Annan and other members of The Elders ( http://www.theelders.org) gathered in Paris at a celebration Dec. 6 to mark the 60th anniversary of the Universal Declaration of Human Rights and to honor the 30 international winners of the Internews-sponsored ‘Every Human Has Rights’ Media Awards ( http://media-awards.everyhumanhasrights.org)

When it comes to human rights, Robinson told the gathering, “Journalists are an incredible way of carrying the message.” Carter lauded the “heroes in the news media” for their role in promoting human rights.

Internews ( http://www.internews.org) organized the media awards to inspire coverage of human rights issues around the world. The awards were held in conjunction with the yearlong ‘Every Human Has Rights’ campaign, which was inspired by the Elders as a way of raising global awareness of the Universal Declaration of Human Rights.
Internews received over 500 entries, with stories focusing on 108 countries; national, regional, and international juries selected 30 stories to receive the Internews ‘Every Human has Rights’ Media Award. Winning journalists received an all-expenses paid trip to Paris to cover the 60th anniversary events.
Among these 30, seven special prizes were announced at the ceremony. These included the special “prize of the public” for “Border Stories” ( http://www.borderstories.org), a series of video portraits by a Boston-based film crew about the US-Mexico border, the longest boundary between the developed and developing world. The special “public prize” was determined through online voting worldwide.

At the event, the winning journalists had the rare opportunity to ask questions of Carter and Robinson. A South African reporter asked Carter about the situation in Zimbabwe, whose government recently refused entry to Carter and other Elders. Carter gave a strong comment calling for a workable government in Zimbabwe.
Also present at the ceremony were musician Peter Gabriel and businessman Richard Branson, who together conceived the idea of the Elders, and journalist and author Mariane Pearl, who served on the international jury for the media awards.
Internews (http://www.internews.org) is an international media development organization that empowers local media worldwide to serve the information needs of their communities. The organization has worked in over 70 countries and trained over 70,000 media professionals.