South Africa and the Scorpions: The Slow Death of an Elite Anti-Corruption Squad 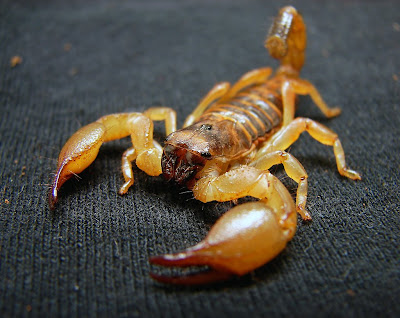 South Africa and the Scorpions: The Slow Death of an Elite Anti-Corruption Squad

High-level corruption — and attempts to investigate it — has had a profound impact on the Republic of South Africa’s politics and the post-apartheid state.

Five interrelated incidents demonstrate the extent to which corruption has jeopardized the legacy of former president Nelson Mandela. In the course of little more than a year, the country has experienced developments that would most likely be regarded as a work of fiction. These include:

• suspension of the national director of public prosecutions;

• dismemberment of the Scorpions, the country’s elite crime-fighting unit.

All these events stemmed from the investigation of various corruption allegations linked to senior members of the ANC. Perhaps the most serious event has been the decision to disband the Directorate of Special Operations, the national prosecuting authority, better known as the Scorpions.

Set up in one of Mbeki’s first acts as the successor to Mandela in 1999, the Scorpions were intended to tackle organized crime, corruption and complex commercial cases. Such challenges were regarded as beyond the capabilities of a police service stretched thin by a post-liberation crime wave and hamstrung by its own bleak apartheid history.

The Scorpions — a unit falling under the prosecuting authority, not the police — adopted a best-practice approach of teaming prosecutors, investigators and intelligence analysts to take on high-profile cases and targets.

But almost from the unit’s inception, there were those in the ruling party who claimed the Scorpions were being abused by Mbeki to focus on his political enemies’ indiscretions. Although little evidence has been advanced to back up these claims of abuse, they became a rallying cry for Zuma and his supporters when Mbeki sacked him as national deputy president.

A sword of Damocles has hung over the Scorpions ever since it appeared that the intra-party political battle between Zuma and Mbeki was swinging in Zuma’s favor.

Zuma was forced to step down when his financial adviser, businessman Schabir Shaik, was found guilty of corruption.

Shaik’s conviction related to millions of rand (5 million rand is about US$490,500) he had paid Zuma, as well as for his attempt to procure for Zuma further payments from the French defense company, Thales. The case was one of the earliest tackled by the Scorpions and flowed from allegations of corruption linked to massive state defense procurement contracts negotiated in 1998 with BAE-Systems, Saab, Augusta, Thyssen, Ferrostaal and Thales.

The original decision by then-National Director of Public Prosecutions Bulelani Ngcuka was to charge Shaik but not Zuma. Ngcuka’s statement — that although there was a prima facie case against Zuma, the chance of a successful prosecution was too low — was widely seen as an attempt to bury Zuma politically while saving the country the embarrassment of putting its deputy president on trial.

However, the overwhelming success of the case against Shaik left Ngcuka’s successor, Vusi Pikoli, with little choice but to prosecute Zuma.

Zuma, galvanized by his dismissal, launched a thinly disguised leadership battle with Mbeki and an undisguised campaign against the Scorpions. These twin objectives culminated in Zuma’s defeat of Mbeki at the African National Conference (ANC) leadership contest in December 2007 and the adoption of a conference resolution to disband the Scorpions.

Zuma also succeeded in legal maneuvers that forced the effective withdrawal of the case against him until legal challenges to raids carried out on his homes and offices by the Scorpions could be decided. By that stage, however, another example of Mbeki’s alleged interference in the independent exercise of prosecutorial discretion had emerged, this one far better documented than Zuma’s vague conspiracy theories.

Corruption and the Police Commissioner

In September 2007, Mbeki suspended Pikoli, citing a breakdown in the relationship between the national director of public prosecutions and the minister of justice. It soon emerged, however, that the real reason for the suspension was executive unhappiness with Pikoli’s decision to arrest the police commissioner, Jackie Selebi.

Investigating Selebi was another Scorpions project. One of Pikoli’s senior prosecutors raised concerns that the police commissioner was interfering in the police investigation of the murder of a South African mining magnate, Brett Kebble. Kebble was a controversial figure, who, it emerged, had been stealing millions from his companies via a series of complicated share loans and swaps. It appears Kebble had not only been using the money to try to trade his way out of trouble but also to buy political and economic protection by funding the ANC Youth League, the vanguard of Zuma’s support base within the ruling party.

Not long after Kebble lost control of his companies and new directors began an investigation of the huge holes in their balance sheets, Kebble was shot dead in his car. The killing is portrayed variously as an “assisted suicide” to give Kebble an honorable exit or as an execution designed to silence a man who could bring down a string of political and underworld figures. Either way, one key suspect to emerge was Glenn Agliotti, whom Kebble engaged as an adviser as his schemes grew increasingly desperate. Investigations later revealed Agliotti as a middleman and “fixer” with a talent for securing the passage of contraband goods through customs.

Especially important to Agliotti was his ability to claim close association with Selebi. The police commissioner, in turn, denied knowing of Agliotti’s involvement in crime but confirmed that he was “a friend, finish and klaar (finished and done).”

The Scorpions’ investigation, however, obtained sufficient evidence to back charges of corruption against Selebi. These charges were based, inter alia, on payments by Agliotti to Selebi totaling some 1.2 million rand (US$118,200) and the release by Selebi to Agliotti of confidential intelligence reports from the British authorities relating to Agliotti’s drug trafficking activities. Selebi, however, was regarded as a key ally of President Mbeki in his fight against Zuma.

Pikoli had kept Mbeki informed of the progress of the Selebi investigation, but when the prosecutions chief informed the president he intended to execute an arrest warrant on the commissioner of police, Pikoli was instructed to desist. When Pikoli refused, Mbeki suspended him and appointed an inquiry into his fitness to hold office.

Pikoli was later vindicated when an independent panel concurred with his decision to charge Selebi. The current acting director of public prosecutions has begun the process of bringing the police commissioner to trial. But Mbeki showed his contempt for the process by merely placing Selebi on leave and renewing his contract for a year shortly before his first court appearance.

While Mbeki’s interference should have prompted widespread disquiet within the ruling party, his actions, for once, dovetailed with the Zuma camp’s own campaign against the Scorpions, and soon Zuma and his supporters had a much more solid stick with which to beat Mbeki.

The prosecuting authority had also re-charged Zuma, following the successful outcome of its legal battle to defend the searches Scorpions investigators had carried out on premises linked to the former deputy president.

Zuma launched another technical challenge, claiming the prosecuting authority had been obliged to consult him before making the decision to re-charge him. This time, a judge took judicial note of the controversy surrounding the original decision to charge Shaik and not Zuma and, not entirely without justification, accused Mbeki of interference in the Zuma prosecution.

This was the lever that opened the floodgates of tension between Mbeki, a lame-duck president with a few months left in office, and the party he no longer controlled. The ANC made a decision to recall him. Mbeki was forced to resign and a caretaker president was installed.

However, the rushed removal of Mbeki (who had won about 40 percent of the vote in the December ANC leadership contest with Zuma) precipitated a decision by some of his key supporters to break away from the ANC and form a new party.

This grouping represents a significant fracture for the ruling party. They have taken as one of their rallying points the alleged assault on the “rule of law” by the ANC in its bid to ensure the ruling party’s presidential candidate stays out of jail.

The split, which has its origins in the corruption probes carried out by the Scorpions, will be too late to save the unit, which is due to cease operating around the same time the country goes to the polls in 2009.

But will the Scorpions’ demise nonetheless have helped create a new environment of political plurality and accountability? That remains to be seen.