“Ethics Were Destroyed” in China; Simmering Discontent as Economy Falters 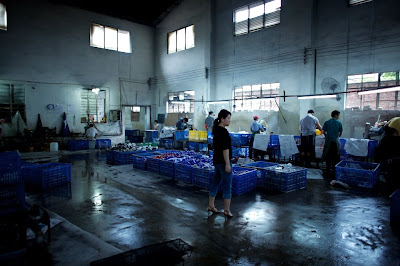 In a preview from the Global Integrity Report: 2008, to be published Feb. 18th, Global Integrity’s Xiao Chi An reports on the corrosive effect of systemic corruption in China. As the government tries to cope with an economic downturn and fall in exports, corruption is eroding stability from within and creating nostalgia for harsher times.

Corruption and The “Good Times” of Mao’s China

By Xiao Chi An
Image by Lyle Vincent

“I have good news,” Fan Xiaoli told her brother, Fan Dayi, on the phone one day in August 2008 (the family’s names have been changed). “I’ve finally found someone who can help us to send Yuanyuan to the school.”

They were talking about how to get Yuanyuan, Fan Xiaoli’s daughter, into a prestigious junior high school in Guangzhou. When test results were released in mid-July, Yuanyuan did not do well enough to meet the school’s entrance requirements. Xiaoli was as disappointed as her daughter. She then decided, as many Chinese people in the same situation do, to try to find someone who could help. Through a colleague, she got to know a Mr. Yang, who claimed to know “some decision-maker in government” and said he could help get the girl admitted to the school if Xiaoli paid him 70,000 yuan (US$10,257). “I know it is corruption,” Xiaoli said, “but it works and everybody is willing to do it if they can afford the money.” She paid the money and by mid-August, Yuanyuan got an offer from the school.

“It is not so bad a deal for my sister because she wants her daughter to go to the school and she can afford the money,” Fan Dayi said, “but it is sad for the people in this country. There is too much corruption. Nominally, we have all kinds of laws, regulations and responsible officials, but in reality, only money and guangxi (nepotism or relations) work when people want something done in this society.”

Longing for a Harsher Time

Fan Dayi’s view probably reflects that of many common people in China. From the outside, China has seen impressive economic growth and prosperity in the last three decades. But for ordinary people, especially those who live in rural counties or are members of the urban lower class, life is another story — one of rising inequality, poverty, a tattered social safety net, abuse of power and, above all, widespread corruption.

“I am sure that China is one of the most corrupt countries in the world. There is only one solution to the problem: to execute those corrupt officials,” said Li Yao, a 45-year-old man from Shanxi province with a high school diploma who works in Guangzhou as a librarian. “Ethics were destroyed by commercial and business forces. I wish we were under the leadership of Mao Zedong. Politics were very clean during his time.”

By most standards, Mao’s China was a horrific country full of infighting, discrimination toward peasants, arbitrary actions by officials, disorder, poverty and hunger, but corruption is so rampant now that many people, especially the underprivileged like Li Yao, are talking about the “good times of Mao’s China.”

“Mao was not very good,” said Zhao Jin, a 65-year-old peasant in a mountainous village in Anhui province, “but his cadres were not as greedy as today’s officials.” On June 25, 2008, a collapse in an iron mine located in Zhao’s town killed 12 people. The accident was covered by many journalists. Following an investigation, the local government and police accused mine owners of operating illegally, and said that two of them had been arrested. “Who can run such a big iron mine without the permission of the government or police?” Zhao asked. “In fact, the local officials and police have interests in the mine, and they gained big money from it. Now it is in trouble and they arrested the owners as scapegoats. That is major corruption!”

Corruption in China is concentrated in sectors that have extensive state involvement: infrastructure projects, sale of land use rights and real estate, governmental procurement, financial services and heavily regulated industries. Officials often collude with illegal groups to gain dirty money. In response, many protests, even riots, take place every year. For example, a violent riot was sparked by the death of a schoolgirl in Wengan county of Guizhou province in June 2008. Refusing to believe the government’s explanation for the girl’s death, people went into the streets, attacked police and burned government buildings.

According to the Guizhou provincial government, the riot was ignited by the people’s long-simmering anger at the local government’s management of issues such as mining, demolition, immigration, land use and so on. The local government and police even work with the organized crime.

“The real reason for the Wengan riot is typical of corruption in China,” said Huang Bin, an associate professor of politics at a university in Guangzhou. “If the party and the government don’t draw some lessons from the incident, the future of the country and the party will be in jeopardy.”

The authoritarian Chinese Communist Party (CCP) certainly realizes the situation, as almost every case of corruption involves CCP party members. To its credit, the CCP does take measures to fight and prevent corruption. In the last decade, the rooting out of corruption had been a very important topic at all the big party conventions. The last five years brought arrest, trial and imprisonment for dozens of high-ranking officials, including the former party chief of Guizhou province, the former party chief of Shanghai, the former vice-party chief of Shandong province, the former vice-governor of Anhui province and many other ministerial-level officials. Two of them were executed. According to statistics from Supreme People’s Procuratorate, between January 2003 and August 2006, 67,505 officials were punished for corruption, an average of 1,600 officials punished every month.

China announced the establishment of the National Bureau of Corruption Prevention (NBCP) in September 2007 “to meet the need to effectively prevent corruption in China.” The National People’s Congress also introduced some laws to deal with corruption in recent years.

“All these measurements are superficial, and they cannot solve the problem essentially,” Huang said. “It is a systemic problem. One characteristic of the political system in China is that nobody can check the power of the CCP. The party in power is the only one who can monitor itself. The most powerful anti-corruption organization is the Central Discipline and Inspection Commission (CDIC) of the CCP. But there is no transparency in the operation of the CDIC and people don’t know what they are doing; neither do they trust them. Furthermore, the CDIC is a branch organization of the CCP. You should not expect such a system and organization to eradicate corruption.”

“There is another important factor when we talk about anti-corruption,” said Li Hua, an editor in Guangzhou. “We lack freedom of expression to check those in power.” He added: “Very often, when journalists get tips and collect evidence of corruption, the Propaganda Department of the Party forbids us to cover the stories. The coverage of corruption in the news is allowed by the party only after it has made a decision. That is to say, the party and government decide when to report, what to report and how to report. They control the media. How can the media play the role of monitor for the people?” In addition to regular censorship, the media cannot publish “negative stories,” including protests and major corruption scandals during major events such as the CCP’s national convention and the Olympics. “I guess that is why we don’t see big corruption cases this year,” Li said.

“It is dangerous,” Huang Bin said. “People can sense corruption everywhere in their lives. They demand a more effective and clean government, but the CCP and its government cannot find a way to solve the problem; they just throw the word ‘anti-corruption’ around, or they just don’t want to lose their power and let corruption go on. Society’s anger is accumulating. Any minor incident could result in big chaos; nobody will win in that situation.”