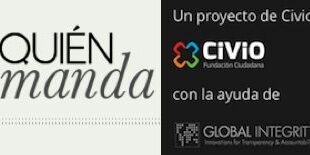 On October 8th we launched Quién Manda (Who’s the Boss?), one of Global Integrity’s Innovation Fund experiments. That’s the good news. The “bad news” is that since the release we haven’t been able to see the bottom of our inboxes, as the reception by citizens has been extremely positive.

More than a hundred people wrote to us to let us know about interesting stories to reasearch, and a dozen more sent us pictures showing relations between public and business entities, pictures that we’ve started publishing after vetting them for accuracy and germaneness. Overall, 46,000 people visited quienmanda.es in the site’s first week, and 124 of them have also participated in the crowdfunding campaign we’ve just started to keep the project growing over the next six to twelve months.

Our main worry with the project was how to motivate members of the public to get involved, especially with helping to crowdsource photos of political leaders meeting with special interest representatives. The fact that we are receiving story leads is a good sign, but we want to go further and encourage people to send us their own pictures. That’s why we’re planning some campaigns around sport or cultural events: it’s a well known fact (or legend, depending on who you listen to) that contracts get signed in the VIP seats of a soccer stadium or during official receptions, so we are calling for people to help us document those events in particular.

We’ve tried to build “media buzz” since the beginning of the project, when we built a basic teaser page with a few interesting photos that advanced the tone and goals of the site. We were able to generate some media attention during that phase with close to ten interviews on radio shows and in newspapers, plus one appereance on TV. After the launch the coverage has increased, and we’ve notched another twenty media references, mostly in digital outlets (see, for example, this TechPresident article). Since all our content has a Creative Commons license, some of our stories are being republished by other media.

The current platform offers a selection of hundreds of iconic photos, tagged with the names and relations of the actors involved, plus a database of 2,500 VIPs and companies, and a dozen stories that highlight and explain the power relations and unregulated lobbying practices that still occur in Spain. These include politicians with no economic background running savings banks into bankruptcy, influence peddling, auditing bodies under de factocontrol of the government, and members of youth wings of political parties becoming advisors to their elders in governments.

How do we do this? Combining technology and traditional investigative journalism, both for researching stories and for delivering the results to readers. We’ve developed from scratch an open-source site using modern web development technologies (Rails 4, responsive design). We’ve scraped public datasets, like company boards from the stock market regulator’s site, and combined them with items extracted manually from official gazettes. We’ve browsed through official photo records, filtered the best ones, and tagged the people in them just as you would in Facebook Photos. All appareances of a given name or face are cross-referenced, allowing us to build profile pages for each VIP or company listing with their relevant photos, stories and relations to other entities, together with an interactive network diagram that allows exploration and helps the reader put the information in context. (We plan to offer a full feature list of the site soon, but you can get a working copy of Quién Manda running already, in less than an hour. Check the github repository).

The ultimate goal of the project is to regulate lobbying in Spain, to try to bring to the surface the current network of informal relations and undocumented meetings. To do so we believe we need to show, through fact-checked and rigorously sourced data, how dangerous the current situation is, where the president of the government acknowledges publicly that he’s happy to have “discrete meetings” when needed, or where a judge investigating corruption can’t get access to the visitors log for a public building because they are destroyed every month for “privacy reasons.” We will only achieve our goal if we can bring this issue into the public consiousness. Encouraging people to participate by sending us information and pictures, along with the early media coverage, has gotten us off on the right foot.