From Accra, the Mo Ibrahim governance weekend and African data 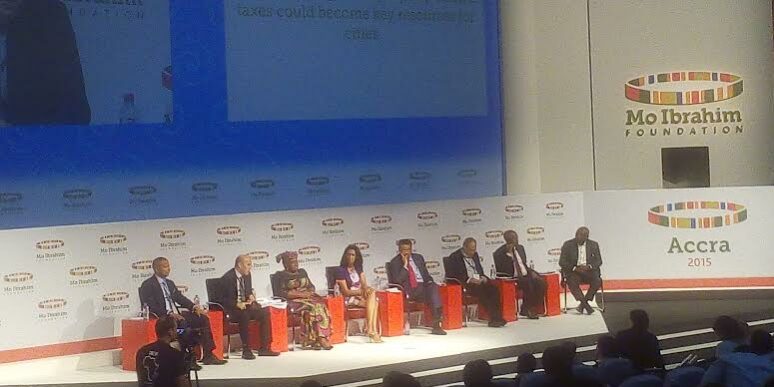 Selected as top performing contributor for the third round of Africa Integrity Indicators (AII) research, Ini Ekott of Nigeria was awarded the recognition of representing AII researchers from across the continent at last month’s Mo Ibrahim Governance Weekend in Accra. Each year, AII contracts with in-country researchers to produce timely, evidence-based data on the transparency and accountability frameworks in their countries. Relying on local expertise, AII provides valuable data to reformers (both inside and outside government) seeking to identify opportunities and options for improvement. For more information, contact us at aii@globalintegrity.org

Ini was asked to share his brief reflections on the event; his article posted here below.

Data can sometimes be downright grim, more so when its subject is Africa. In the last three years for instance, only six out of the continent’s 54 countries measured above a 61 on transparency and accountability (61-80 being the range for ‘moderate’), as evaluated by Global Integrity. None made the 81+ mark (81-100 being the range for ‘strong’).

Nigeria, Africa’s biggest economy and most populous nation, scored 59 in 2013 – its best. That country produces the world’s sixth largest volume of liquefied natural gas, yet over 80 per cent of its households cook with firewood and kerosene.

Such stark figures about Nigeria and other African nations screened hours on end at the Accra International Conference Centre, Ghana, Saturday, November 21, 2015 reminding hundreds gathered there of the perennial problems that confront the world’s second largest continent, and the leadership flaw that helps deepen those problems.

I attended the ceremony as a researcher for Global Integrity – one of 33 organisations that develop data on African leadership and governance annually. Those data make up the Mo Ibrahim Index of African Governance.

As lead researcher for Nigeria, I have been part of that process, and my work was rated the best for the third round – the reason I was in Accra. Separately, I work as an editor at Premium Times, Nigeria’s most popular investigative online newspaper.

The annual Mo Ibrahim event, which brought together hundreds of other researchers, policy makers, entrepreneurs, senior government officials including President John Mahama of Ghana, featured talks about urbanizing Africa, an edgy debate about how democracy and development affect each other, a concert and a football match.

On urbanization, according to the foundation’s 2015 Facts & Figures report ‘African Urban Dynamics’, “in the next 35 years Africa will need to accommodate almost 900 million new urban dwellers, which is equivalent to what Europe, USA and Japan combined have managed over the last 265 years.”

How prepared is Africa for this exponential demographic threat?

Participants also debated how democracy and development affect or complement each other.

A day earlier, Hifikepunye Lucas Pohamba, former president of Namibia had been awarded the $5 million Mo Ibrahim Prize for Achievement in African Leadership. Besides the impressive prize money, the 80-year-old will receive additional $200,000 each year, for the rest of his life, as part of the prize.

The award, sponsored by Sudanese-born British mogul, Mo Ibrahim, aims at encouraging African heads of government to improve in leadership, implement good policies and know that there is more to political power than corruption and tenure elongation.

Pohamba qualified for the honour as a democratically-elected leader who ran an outstanding, transparent and inclusive government, quitting in the end without manipulating the law to extend his tenure.

Straightforward as those benchmarks seem, they are too often hard to find on the continent of Africa so much so that trustees of the award refused to honour anyone in the last two years. Mo Ibrahim said recognizing Pohamba, the highlight of the three-day packed event, was needed to tell the world that despite its challenges, Africa has its heroes.“The narrative outside the continent has been that African leaders are either dictators or thieves or both,” Ibrahim said. “We must start to celebrate our heroes.”