The good, the bad and the… rest 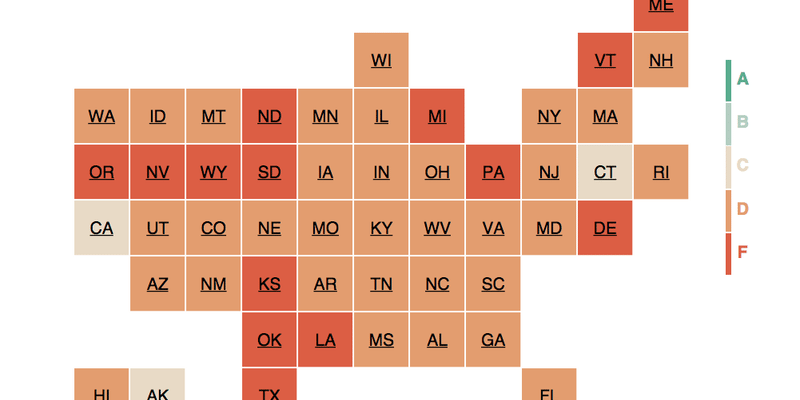 In 2015, Global Integrity and the Center for Public Integrity published the State Integrity Investigation (SII), a state-by-state analysis of transparency and accountability measures around the United States. By examining government-regulated ethics sectors such as campaign finance, lobbying disclosure, state budgeting and freedom of information, researchers were able to determine how states fare relative to one another.

The big picture wasn’t pretty: Alaska topped the ranking with a C and the other 49 states earned Ds and Fs, grades that no one would be proud to bring home. While some states have voiced interest and support toward getting their ethics-laws in order, many more have remained quiet or have prevented reform from happening.

Now, one year after Global Integrity concluded the research period (*), we took the opportunity (**) to see how state law has changed over the past twelve months in one crucial aspect of public administration: political financing or “campaign finance.” We wondered if we could identify changes (positive or negative) over the past year and since the publication of the results.

We will present the results of our follow-on investigation in three blog posts over the next few weeks.

A word on methodology

Each of these three categories plays an important individual role in keeping state campaign finance transparent and accountable.

A first look at the data

Looking at the SII data and tracking progress on these issues over the last year since publication, we find that the evidence displays a mixed picture: According to our research, 13 state governments approved legislation changing contribution limits, 19 states revised disclosure requirements and 28 state governments enacted penalties or passed laws modifying their oversight mechanisms.

This data does not present a single trend. The states are diverse and most experienced progress in some areas along with stasis or regression in others. This means that advocates, especially those who work at the state level, should be vigilant and push for meaningful reform. Analyzing our findings, here is our take on the good, the bad and the …rest.

Just two states experienced a trifecta of positive change in all three political finance categories: Maryland and South Dakota. These states ranked 22nd and 47th, respectively, last year. It’s a positive sign that states that were in the middle or bottom of the ranking demonstrated the capacity for change this year, in ways minor or major.

Just one state experienced regression in all three categories:

Overall, our research showed that the most common case in the 50 states was not progress or regress, but stasis over the past year, particularly in the categories of limits and disclosure. And aside from administering penalties, just a handful of states revised laws regarding oversight.

Given that most states received Ds and Fs for their campaign finance rules in last year’s investigation, we already know that the status quo is not acceptable. The tide of money in politics will not turn on its own. To promote a culture of openness and transparency, the states must take an active stance. Lawmakers must act to strengthen the integrity of our political systems by placing adequate controls on the private money going to fund our public campaigns.

Follow along with our series of posts over the coming weeks to discover further details about what’s changed in the law and practice of campaign finance in the states over the past twelve months.

* The research period ended by March 31 for in-practice observations and June 30 for in-law research. The index was published in November 2015, accompanied by in-depth news articles published for each state.

** Sunlight has created a significant body of research on the state of campaign finance over the years (see here, for example). In this particular instance Sunlight partnered with Global Integrity to see how Sunlight could make use of the data and utilize Global Integrity’s initial research as a springboard for additional in-depth analysis. Research methodology and framing of this research were developed by Sunlight. The project was financed by an outreach/advocacy budget provided by Global Integrity.

Toward a more professional and ethical civil service in Nepal
July 30, 2019

Beating kleptocrats at their own game: Learning how to tackle kleptocracy more effectively
June 13, 2019