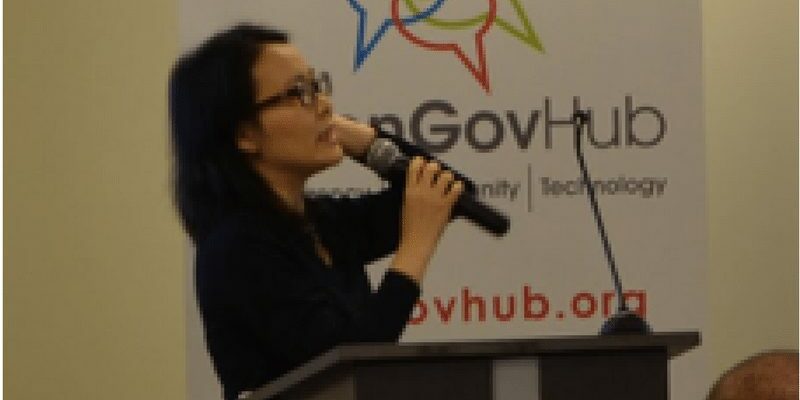 Last Thursday September 14th, we at Global Integrity and the Open Gov Hub were pleased to host Professor Yuen Yuen Ang for an event about her groundbreaking book, How China Escaped the Poverty Trap. This was accompanied by a rich panel discussion with commentators Edouard Al-Dahdah from the World Bank and Shanthi Kalathil from the National Endowment for Democracy.

Ang’s book has begun to make waves in our field (see book reviews from Yongmei Zhou, Michael Woolcock, Lant Pritchett, and Duncan Green),  and we were excited to convene a discussion to help continue the conversation forward.

You can watch the full event here.

Moderator Alan Hudson kicked off the event by noting three reasons he was excited to hear from Yuen:

Ang opened her remarks by presenting the poverty trap: the notion that poor countries are poor because of their weak institutions, and that they have weak institutions because they are poor. While this vicious cycle is concerning, she contended that encouraging poorer countries to adopt governance arrangements that rich countries now have – “getting to Denmark” – often makes things worse (citing Woolcock and Pritchett’s paper, “When the Solution is the Problem.”)

Ang then highlighted three key facts about China’s path to rapid, unprecedented development – lifting 800 million people out of poverty in just one generation. First was a reminder of just how poor China was in 1980, with a lower GDP per capita than Malawi, Bangladesh and Chad at the time. Second, she noted that China’s development process began in an authoritarian but un-technocratic bureaucracy (unlike Singapore and Hong Kong for example which inherited technocratic bureaucracies from British colonial rule). Most Chinese government officials only had 6 years of education when this process began. Third, she reminded the audience that that China ultimately lifted 800 million people out of poverty without any anti-poverty policies. How?

Based on these insights, she presented a novel, three-step framework to understand how development occurs:

In other words, “Poor and weak countries can escape the poverty trap first by building markets with weak institutions and, more fundamentally, by crafting environments that facilitate improvisation among the relevant players” (from p.16 of the book – you can read Alan’s notes from throughout the book here). The key piece of advice here is: start with what you have, not what you’d like to have.

Ang asserted that institutions that outside experts might categorize as “weak/wrong/backward” can be functionally strong. For example, Chinese local civil servants used patronage and personal connections to marshall resources for the government. (Intriguingly, Ang argued that the millions of civil servants in China should be considered part of civil society.) But as local governments got richer their preferences changed over time, evolving to become a specialized, professional bureaucracy.

She stated that while China is the best example of this three-step process unfolding, other examples of the same process can be found in the emergence of the Nollywood film industry in Nigeria, property rights in late medieval Europe, and the public financial system in the American Gilded Age in the late 19th century. Perhaps indeed, in many or most stories of development.

The key lesson: once you have established markets and healthy economic activities, any society does need ‘good’ institutions such as rule of law, but in order to create markets societies have to start with what they have, no matter how ‘backwards’ or wrong those institutions may appear to outside Western development practitioners.

Ang argued that we often take an ahistorical approach to development, forgetting that countries that are rich today didn’t start with the institutions they have now, and “kicking away the ladder” of options that currently rich countries used to develop as Ha-Joon Chang puts it. She discouraged the practice of comparing everything to a contemporary Western model (striving to have all countries “get to Denmark” may blind us from seeing existing institutions in any country that can be harnessed to enable economic growth), and instead argued in favor of using multiple benchmarks of good governance.

This gave guidance for external development actors: “When foreign experts enter developing contexts and insist that there is one universal standard of good institutions – namely, that found in wealthy capitalist societies – this by itself imposes a lethal impediment against localized adaptation” (p. 245).

Shanthi Kalathil asked how the pursuit of economic growth might mask other trends counter to democratic development, such as growing inequality. She critically asked if working with existing corrupt institutions to promote development further entrenches corruption. Edouard Al-Dahdah then echoed Ang’s distinction between the normative versus functional role of institutions by emphasizing that the World Development Report 2017 argues that it is important to consider the function as well as – and perhaps more than – the form of institutions; that is, how effective they are at doing what they are supposed to do. In the language of Deng Xiaoping, who dropped Mao’s ideology in favor of effectiveness: it doesn’t matter whether the cat is black or white, as long as it catches the mice!

Al-Dahdah summarized how the WDR 2017 looked at 13 diverse country cases of growth, equity and security and they found that all countries had three things in common:

This incrementalist understanding of development aligned with Ang’s presentation by pointing out how many countries begin with apparently corrupt practices (rather than ethical standards) and only evolve preferences and norms against corruption over time.

A rich discussion between audience and presenters ensued. One question was about how exactly China implemented these reforms, to which Ang responded “directed improvisation” – meaning that the Chinese central government never strictly controlled local governments and instead gave them broad parameters in which to operate (similar to the guidance artists receive for their performances). This – along with incentives to innovate – allowed and encouraged local governments to experiment, adapt and improve based on their specific contexts and ultimately achieve strong development.

A related question was, “what should we learn from how China learns,”to which the response was largely to not bother to imitate the form of institutions but instead consider their function, and was to create conditions for spontaneity – learning happens best in an environment that combines freedom and structure.

Another question asked if culture is not a deeply influential factor in shaping the norms and institutions in any society? Ang responded that culture is by definition fixed over the long-term and thus cannot explain the sudden great change in development in China’s very recent history. Al-Dahdah added that incentives and cost-benefit analysis can explain the development of any society rather than culture, and that the form of institutions should not be copied but rather development practitioners should always ask themselves what function institutions are fulfilling in their particular contexts. As Ang states in her book, “My central message is that the underlying ‘cause’ of economic development, if indeed we had to name one, is the construction of an adaptive environment that empowers relevant actors to improvise solutions to continuously evolving problems” (p.223)

A healthy debate ensued around corruption. Ang noted how petty corruption has declined in China but grand corruption is on the rise (and her next book will be on categorizing and measuring types of corruption and specifying their effects). She argued that ultimately corruption does not affect people’s daily lives as much as it used to as people no longer need to pay bribes as much in their daily government interactions. Shanthi Kalathil pushed back and asked what democracy and human rights-related problems we may be inadvertently contributing to in pursuit of economic growth. Another audience member asked if it is truly possible to harness corruption (as an institution in service of economic growth), without embracing it? Yet all agreed that Ang’s work – and China’s success in lifting 800 million people out of poverty – highlights the need for thinking, policy and practice to move beyond the “Good Governance” agenda, and adds much to the emerging outlines of an agenda that focuses on local innovation, learning and adaptation.