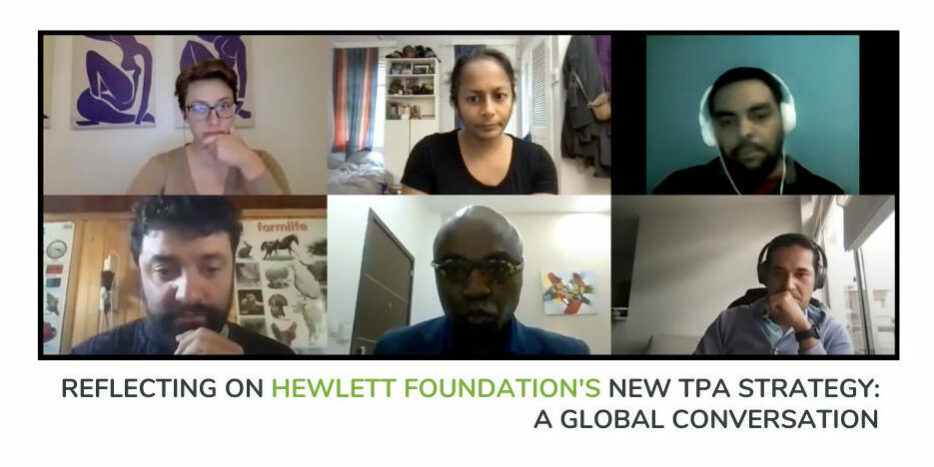 Earlier this week, we had a conversation with a range of CSO leaders from the “Global South” to hear feedback on Hewlett’s new TPA Strategy. They included Anca Matioc, Founder and Executive Director of La Sobremesa, Oluseun Onigbinde, Director and Co-Founder of BudgIT, Alfredo Elizondo, Executive Director of GESOC A.C , Fabrizio Scrollini, Executive director of the Latin American Open Data Initiative (ILDA)  and Charlie Martial NGOUNOU President of Afroleadership. They steered the conversation and here’s what they had to say:

The shift from International to Local

Jorge: Shifting from national to local doesn’t solve the problem. What are the assumptions used for that shift?

Anca: I am the former Engine Room director of Matchbox, an intl org that they will no longer possibly fund, and currently the director of La Sobremesa, a consultancy focused on supporting local organizations in Latin America. It’s a big shift in my mind that these organizations – international – are not going to be funded and that the focus of the new strategy is around local. I really appreciate the clarity around that. I hear Alan’s concerns about missing connections across borders, but I think real systems change happens in the country.

I’m generally wary of big strategy shifts like this – not only from Hewlett but any funder. If they are going to hopefully diversify and go more towards local actors, not just in TPA, but their other focus with women and underserved communities, you’ve created a vacuum. They will stop being funded or stop being funded so much; a lot of the international organizations were Hewlett – the natural thing of things will happen, these orgs where we are really supporting local orgs. Some may not have any idea how to do that. I’d like to see a rollout of this strategy so people have time to adjust – take care of the ecosystem we have created.

Fabrizio: The Mexican RTI agenda is a good example of where the foundation contributed significantly. Nevertheless, the current backlash shows that something probably went wrong, particularly as the foundation decided to some degree not continue support for this agenda. This has consequences in the region. If it’s no longer a poster case, then why wouldn’t other countries be the same?

Alfredo: Since they changed strategy we tried to modify our approach. Mexico is a very particular context that does not correspond to other African countries. This last strategy change seems reasonable. The in-country approach would be a good bet. Country by country scenario could be a good thing.

Anca: The folks who get in-country funding are generally well established and they often overlook the local ecosystems, so I’m happy to see them look at it from a systems-change level.  Individual organizations won’t have lots of success quickly. These things do take time, many organizations working on the same issues. It takes even more time when the approach is a systems-level approach, where they’re wanting to tackle even more complex and cultural issues (like exclusion of women and other vulnerable groups). “A rising tide lifts all boats” type of thinking. This can be powerful, but will take time and patience.

Fabrizio: Without some sort of international engagement, reforms in Mexico and other countries will probably get lost. Good cases emerging in these countries (such as in Mexico) would not inspire others (think RTI reforms) or when there is a menace to this particular country Hewlett supports, solidarity will not be there. That said, supporting international standards without impact in national governance is probably not a good idea.

Charlie: My country is very enlightening in this regard. Once people learn to self-manage, they never forego the social power that stems from knowledge acquired. I take this lesson from the ongoing crisis in Cameroon in the Anglophone regions, that once (before the reunification) managed their own affairs and are currently demanding more freedom from the central government. If we train grassroots organizations and build their capacity, this will change their relationship to power and create sustainable involvement in local affairs, over time.

Oluseun: When it comes to civic organization, media, they are a divergent set of capacities. We don’t have the same capacity for local and global work – there has to be a clear analysis. What are the areas of strength – is it influencing policy? Digital media? We want to have conversations to build consensus, you still require national champions for that.

Funding in-country: Why Mexico and not Costa Rica?

Fabrizio: The foundation has the prerogative to choose where to invest, but the logic behind this needs to be more clear, particularly in terms of political/strategic terms. What’s the foundation’s interest in X country? And why X and not Y? It can probably be articulated better with the ultimate goal the foundation is pursuing.

Anca: I hope that as part of this strategy that means they will fund more diverse organizations. Not just well-established, but new ones. They are pulling from trends in the ecosystem – like trust-based philanthropy where they invest in potential. I would hope that in selecting their focus they take care to make sure the organizations are (1) representative of the targets (like for example women-heavy teams and women-heavy boards), (2) embedded in the communities they want to influence, (3) diverse in the portfolio per country, especially in thinking beyond the established organizations in the capital cities, and (4) lead with trust – trust in the organization’s expertise and trust in their potential.

Alfredo: The newest strategy makes more sense than the previous one. Participation at the local level, work with women and vulnerable groups, they all align with what’s happening in the Mexican context. It’s different because they used to have global lines of working, but now they are moving away from that. It’s always good to see what’s happening in other places and if there are possibilities of replicating those experiences – that’s a current weakness in the new strategy.

Oluseun: Also a huge push on underserved communities, we must foster unlikely partnerships in underserved communities. They are faith-based groups, trader associations, youth groups, women groups. A need to coordinate that and bring it all together. Build consensus locally for transparency, power to localization. You can’t run away from the spaces.

Jorge: “They haven’t seen the structural change they would like to see.” What does that mean – how will this new approach take us towards that change? How will you collaborate with others at the local and global level?

Anca: Frame our goals as broader than public service delivery but that’s inconsistent with the concern of spreading too thin. If they want to go broader and get into more complex, local ecosystems, I hope they look at other funders who have done this for many years (like the Global Fund for Human Rights or any of the funders who are behind Trust Based Philanthropy project or #ShiftthePower) and see that it’s not only the strategy but the WAY they implement that strategy and work with partners that matters.

Charlie: If a central government is not willing to work for TPA, most of the things agreed seems to be “fake”, and justified by the need to please international institutions (WB, IMF, etc.). In this case, even with laws and regulations in place, nothing works when it comes to TAP. If a government needs money, it will appear to comply with funders and institutional requirements, and it will probably craft an adapted response, but no real change will take place in the country as relates to TPA. We have come to understand that there is great need to focus on a “local level”, to direct resources and energy to grassroots populations. Once we build people’s capacity, acquired knowledge doesn’t just vanish, regardless of what happens in the socio-political context.

Alfredo: Piggybacking off Charlie, I agree. There’s good access to information law in Mexico but a lot to be desired in its implementation. Local organizations don’t receive funding in practice – it’s hard to understand how the new strategies can get to that local level in order to reach organizations that lack capacity to receive the funds. How will they move to the local level?

Fabrizio: The fact that Hewlett acknowledges inequity, and underprivileged populations – they acknowledged in the past but now it’s upfront. The move from logic to good public service delivery – some people will never get that because of who they are.

Oluseun: We can’t move away from localization, people on ground need to be able to have trust that they can do this on their own. As we expand, we don’t want to parachute ourselves, we pay attention to active listening, we are much more humble. OGP may look like it’s a global idea but it’s also decentralized as much as possible. It’s about transforming service delivery.

Jorge: They talk about shifting powers but I don’t see the incentives they are planning to shift or how they will do that. What are the incentives and dynamics blocking change in different countries?.

Fabrizio: What’s not clear is – what do you want at the end of this? What is the desired future? More powerful CSOs pushing for good governance and more inclusive reforms is a potential path. How does that look in terms of government structures and leadership? Or is this strategy only aiming to address one part of a wider system? The future isn’t clear to me – you have to address how power and governance look like in the future, if the strategy is successful. Furthermore, how does this strategy connect with other stakeholders and in which ways? Is this part of a similar vision?

In solidarity with the people of Ukraine
March 1, 2022